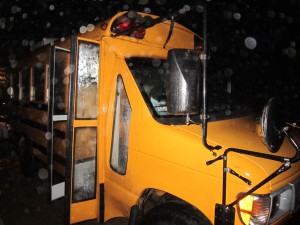 Last week I went to Martha’s Vineyard, where my attempts to hang out with President Obama and his family were rudely thwarted by the terrible weather. Luckily, the first family wasn’t actually my reason for visiting. Instead, I went there to stay with an entirely different family, of musicians and artists, whose spare room is an old school bus (shown, in the middle of the night, in the middle of a(nother) storm) in their driveway in the middle of the forest in the middle of the island. At times, it was a bit like staying on a boat, as when the wind and the rain really got going I felt like I might simply float off, never to be seen again.

While I was there, I was co-opted into helping with an art project. And I should be clear, despite my many years writing about design, I myself can barely draw a stick man. So when I offered assistance to Sam, one of my hosts, who’s been commissioned to create an animation music video for the new single by British musician Badly Drawn Boy, I thought he’d realize I was just being polite. 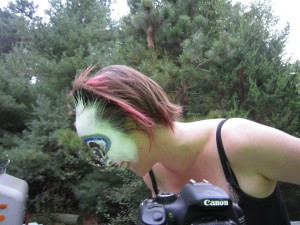 Instead. he promptly said he “needed creatures”, and before I knew where I was I was being daubed in thick clown makeup and filmed against homemade green screen, blinking and trying to act like some kind of weird woodland being. (That’s me in the picture, trying to make sure we were filming correctly, as Sam wasn’t actually there to oversee proceedings, what with being too busy, you know, trying to create an actual animation video.) “Peck slowly! Like a slow chicken!” shouted my friend Mara, herself a fabulously accomplished singer and video artiste, who was fully immersing herself in the role of camerawoman (and who’d applied the make up that converted me into bizarre other world oddity). “Now… Teeth! Nothing! Teeth! Nothing!” The whole scene was completely surreal and ludicrous and hilarious… and try as I might, I couldn’t help but think that even as we’d tried our best and had a lovely time fooling around and laughing like maniacs, nothing would ever come of it.

Then I saw what Sam did with our amateur footage. And I really have become a chicken. A flapping, animated, completely weird chicken. And I couldn’t be more proud. It’s still entirely possible that I won’t make the Badly Drawn Boy cut, and I won’t be either sad or surprised if I don’t. (If I do, why, I’ll post here, of course.) But in my heart and for all eternity, I’ll now always be a Badly Drawn Boy Chicken. And I can’t lie; I think that’s pretty fantastic.

UPDATE: I made the cut! And, truthfully, I’m less BDB Chicken and more BDB-Blinky Bird. Still, see what Sam made below. I’m honestly less impressed with my own performance than I am with the beautiful, luminescent colors of the shots with singer Damon in them. Gorgeous.