Last night, I attended the National Design Award shindig at Cipriani in midtown Manhattan. I can often be somewhat curmudgeonly about such affairs, griping at warm wine and cold food and resenting the over-the-shoulder gazing that goes on as people try to work out who over there might be more important to talk to. And last night certainly brought out plenty of the big guns: Throw a bread roll and take out a design world icon. Milton Glaser gave the Design Mind award to the fantastic Ralph Caplan, who’s as spry a wit as he ever was (at 85) and who told me he’s working on his next book, a memoir based on his time as a standup comedian in the Pacific in World War Two. Sam Farber gave the product design gong to his early OXO co-conspirators, Davin Stowell and Tom Dair from Smart Design. Stephen Colbert beamed in by video to poke fun at communication design winner, “my son” Stephen Doyle (above). (Ok, Colbert’s not really a big gun of design, and he wasn’t really there, but it was a funny moment all the same.) 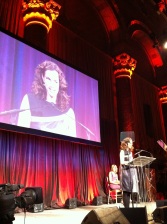 Current Loeb Fellow and former I.D. magazine supremo Chee Pearlman honored Pentagram partner and interaction design guru, Lisa Strausfeld (left). And the lifetime achievement award went to Jane Thompson, another I.D. alum and the powerhouse behind the legendary store Design Research, which introduced European design such as Marimekko to the United States. In a charmingly lowkey way, Thompson was clearly pretty happy about the accolade, but seemed most pleased about the number of women going up to receive awards (Rodarte won in the fashion design category while People’s Choice went to Leslie A. Ligon for her Braille Alphabet bracelet.) Things have changed a lot in the design field, said Thompson, and in this regard at least, they’re heading in the right direction. Thanks to Bill Moggridge and all at the Cooper-Hewitt for a stellar night, when I remarkably didn’t feel like throwing a bread roll at anyone.