Bill Moggridge, co-founder of IDEO and the newish director of the Cooper-Hewitt museum in New York this morning announced the winners of the 11th annual National Design Awards. The honorees form an eclectic list, with prizes given to representatives from fields including interaction (Pentagram’s Lisa Strausfeld), architecture (Philadelphia firm, KieranTimberlake), and product design (Smart Design).

The “Design Mind” gong for someone who has “affected a shift in design thinking or practice through writing, research and scholarship” went to Ralph Caplan, former editor of I.D. magazine (RIP) whose book By Design: Why There Are No Locks on the Bathroom Doors in the Hotel Louis XIV is a must-read for all those wanting to wrap their heads around the sometimes opaque and confusing discipline of design. His 1982 book, updated in 2004, contains pithy soundbites by the bucketload, including my long-time favorite: “while design by committee represents a solemn commitment to mediocrity, design by collaboration is simply the way the world works, usually for the better.” 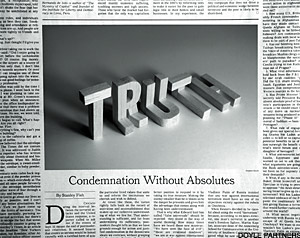 Stephen Doyle, who picked up this year’s award for communications design, has a similarly trenchant take on design by committee. For Doyle, who regularly works on projects for mega-clients such as Barnes & Noble and Martha Stewart as well as smaller commissions such as illustrations for the NYT op ed page (shown), the key is in access to the C-suite. “Good design starts at the top. You have to work for the boss,” he said when I called to congratulate him this morning. “You can’t make headway against a bunch of middle managers who are trying to cover their asses when reviewing design work. Everyone wants to not fail, so things will get diluted on the way up. ”

Doyle, who proudly told me that he’s been at the helm of a design studio in New York City for “25 years and one week”, added: “When you deal with the leader they’re so much less afraid of failure because they’re responsible for success.” That’s an attitude that anyone involved in commissioning or reviewing projects of any type—not just design—would do well to bear in mind.

Here, take a look at the full list of this year’s winners and runners up. Congratulations to all.

This post was originally published on the NEXT blog at Bloomberg Businessweek.